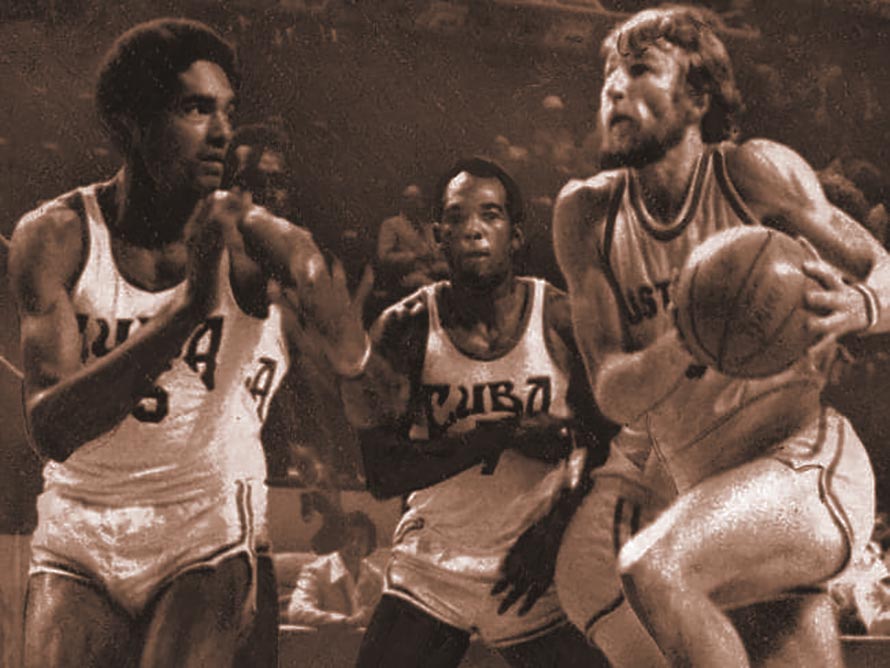 Australia as the host Nation was given automatic entry into every sport including Basketball. This was Australia’s first exposure to International Basketball.

They had selected a team for the 1952 Helsinki Games, but due to a lack of funds, the team was unable to travel to the Games.

So in 1956, a group of part timers were selected to participate, but did not have sufficient funding to even allow them to get together for trainings – they had 5 from South Australia, 4 from Victoria and 3 from NSW.

So suddenly a very inexperienced but enthusiastic group of young men was thrust into the International spotlight and became –   Australia’s First Basketball Heroes.

Although they only won 2 of the 11 games, they did put up some excellent performances, especially individually.

George ( Juris ) Dancis  –  was the leading rebounder for the entire games with 108, ahead of Bill Russell with 102 ( yes the Bill Russell, with 2 NCAA titles at the University of San Francisco and 11 NBA titles including 2 as player coach with the Boston Celtics ). Now that’s something to be proud of.

Inga Freidenfelds – a team mate of George with the Adelaide Lativians ( ALS ) finished 5th overall in scoring with 17.3 ppg , whilst George finished 9th with 16.3.

Not bad hey ! –  2 of the top 10 scorers at the Olympic games, both playing for the same club in Adelaide.

These remarkable efforts started a trend with Australia producing some amazing individual efforts at ensuing Olympics.

The Australian team participated in the Qualification Tournament, but did not compete in the actual games, with both George and Inga, again part of the team.

Again the Australians did not make it past the Qualification Tournament, with a very disjointed team suffering from some intense interstate rivalries, not helped by parochial Victorian Coach Ken Watson.

The leading scorer was Davis Peralta from Panama with 23.8 ppg

Aussie star Eddie Palubinskas, who burst on the scene in 1970, finished 2nd overall in scoring with 21.1 ppg, behind Japan’s Masatomo Traniguchi with 23.9, surely the only time a Japanese player has ever led the scoring.

These games of course were dominated by the ridiculous and orchestrated shemozzle of the USSR victory over the USA in the Final and the terrible slaying of the 11 Israeli athletes by the Palestinian Terrorist group Black September.

For the 1st time an Australian led all scorers with Eddie Palubinskas going one step further than Munich finishing 1st with 31.3 ppg including a game high 48 in the 120 – 117 overtime win over Mexico.

Eddies long time nemesis Mexican, Arturo Guerrero who had 40 in that game, finished 2nd overall behind Eddie with 27.3

Ian Davies led all scorers coming in 1st with 29.3 pts per game ahead of Stanislav Kropliak from Czechoslovakia with 26.3.

So for 2 Olympics in a row an Australian was the leading scorer.

The USA boycotted the Moscow games due to the Soviet invasion of Afghanistan – go figure?  A decision which became laughable, when 20 years later they themselves invaded Afghanistan

Ian Davies  –  The Yank from Tasmania

Ian had been born in Launceston, the son of a quite famous 125 game Carlton VFL footballer, Fred “ Mulga “ Davies, who was part of their 1947 VFL Premiership team.

Unfortunately Fred passed away when Ian was 5 and then Ian moved to Galesburg, Illinois in the USA with his mother, to be closer to her sister.

He discovered Basketball late in High School,then spending 4 years at Graceland College in Lamoni, Iowa, becoming the Schools top scorer every year and the all time leading scorer.

He was named the “ 1979 Iowa College Player of the Year “, an outstanding achievement considering that he was up against players from the “ Big “ schools such as Drake and Iowa.

He was playing some CBA with the Maine Lumberjacks, before a visit from an old family friend from Launceston, Neil Kearney, who told him about the Australian NBL that was starting up that year and that Launceston were entering a team.

So Ian made some enquiries and the rest is History, with Ian returning to Launceston and winning a Championship with them the following year.

That would have been quite a phone call, when the Launceston Coach received a call from this quality US College player, with an American accent, who happened to mention “ Oh, by the way I was born in Launceston “

He put up some big numbers for Launceston Casino City ( who surprisingly, dropped out of the NBL the year after winning the title – seems like they could play, but couldn’t add up ), which attracted the interest of Moscow Olympics coach Lindsay Gaze and Team manager Bob Staunton.

So Ian found himself on the plane to Moscow, something which would never have crossed his mind whilst living in Galesburg, Illinois.

Following the Moscow Olympics, Phil Smyth an Olympic team mate persuaded Ian, to take up a short stint with Sturt in the Finals of the South Australian State League, where Phil was the Club Captain.

I was an assistant coach with Sturt at the time and got to know Ian really well.

He had two stints in Adelaide and although making a significant contribution, was unable to get that elusive title that Sturt so desperately wanted.

He was very impressive, standing 6’6” tall, quite athletic and a remarkable shooter, with extensive range all over the offensive court. He was definitely “ Downtown Davies “.

He shot the ball from high behind his head, making it almost impossible to stop.

I am sure that if you saw him play, you would remember his bombs from the corner, which seemed to be his favourite spot.

Rather than swish the ball, his 3 pt shots were long range bombs, which really brought the crowd to their feet. He drew crowds wherever and whenever he played.

He was a really good guy, a terrific team mate and made a huge impact in Adelaide during his short stays.

He was the most laid back guy that I have ever met, if he was any more laid back, he would have fallen asleep standing up.

Following his retirement, he remained in Sydney involved in Coaching Juniors through an academy that operated on the outside courts at Darling Harbour .

Ian also represented Australia at the 1982 World Championships in Colombia, where he again led all scorers with 23.4 ppg.

Regrettably Ian passed away in Hobart in 2013 at the age of just 57, way, way too soon and is very sadly missed by all of those who had the pleasure of knowing him.

Given some time, I will write a dedicated Blog to Ian.

Following Moscow, Ian again led the Australian team scoring in 1984 with 16.1 ppg.  The scoring for LA was led by an Egyptian – Soliman Mohamed with 25.6 ppg, and interestingly Egypt did not win a game, finishing 0-7. This must also be the only time that an Egyptian player has led all scorers.

In these games the Brazilian star Oscar Schmidt finished 3rd overall with 24.1 ppg.

Simply known around the world as “Oscar ”, he would go onto to dominate Olympic scoring for many years and is the all time leading scorer in Olympic history followed by Andrew Gaze.

Note  –  the Soviet Union did not participate in retaliation for the USA boycotting  Moscow, wow, that was no surprise!

“Oscar“ led all scorers with 42.3 ppg ( WOW ), with Andrew Gaze coming in 2nd  with 23.9. That is an absolutely amazing performance by Oscar, winning the scoring by over 18 ppg, where he was simply unstoppable. The Seoul games provided a great result for Australia, who for the first time played off for a medal.

Oscar again led all scorers and what a list it was.

Now that would make a great starting 5 for an NBA team.

The continued ongoing strength of Croatia and Lithuania is amazing  with Croatia having a population of only 4 million and Lithuania, just 2 ½ million, with both countries certainly punching above their weight.

They both not only have produced great players consistently, but very big, athletic players and great shooters as well, the list of the great players that they have produced is far to many to repeat here –  maybe that would make  a great topic for another dedicated Blog.

“Oscar“ from Brazil led the scoring for the 3rd Olympics in a row with 27.4 ppg, an achievement that is most unlikely to ever be beaten or equalled.

Andrew Gaze was 3rd with 23.8 and Shane Heal came in 5th with 17.8, a great result for Australia who for the 2nd  time played off for a Medal.

Australia did themselves proud in their 1st home Olympics since Melbourne in 1956.

Andrew Gaze carried the flag into the Opening Ceremony beaming from eye to eye, to the deafening support of the Australian biased crowd.

In a remarkable achievement,  Australia provided the top 2 scorers of the games as Andrew Gaze led the scorers with 19.9 ppg, ahead of team mate Shane Heal with 14.9 and NBA veteran Vince Carter finishing 3rd with 14.8

Again Australia missed out on the Bronze Medal losing again to Lithuania 89 – 71  for the 3rd time.

For more detailed information on Andrew Gaze, please check out the Blog on this website – Australia’s Greatest Basketball Families.

Spain’s Pau Gasol led all scorers with 22.4 ppg, followed by Phil Jones from New Zealand on 21 and China’s Yao Ming with 20.7.

Australia did not perform that well going only 2 – 6, with Shane Heal leading our scorers with 16.7

Pau Gasol led all scorers for the 2nd games in a row with 19.6 ppg ahead of the Chinese and Houston Rockets star, Yao Ming, who delighted his home crowd with 19.

Australia finished up at 3 – 3 and Patty Mills was the leading Australian scorer in his 1st Olympics with 14.2 ppg.

For the 4th time in Olympic history an Australian led all scorers when Patty Mills finished 1st with 21.2 ppg ahead of –

Patty Mills again performed well finishing as the 2nd leading scorer, despite having a higher score than he achieved in London.

Rio, was the 4th time that Australia has finished 4th

Be patient, I am working on a dedicated Blog about Patty Mills and hope to post it soon.

So the Aussies have done us proud, finishing 4th and missing out on the Bronze medal on 4 separate occasions , but the list of our scoring achievements is something to be really proud of

Andrew gaze is the 2nd all time leading scorer in games history.

The Aussies have much to be proud of, but need to go on and achieve that medal in Tokyo.

He is also the all time leading scorer in the games history.