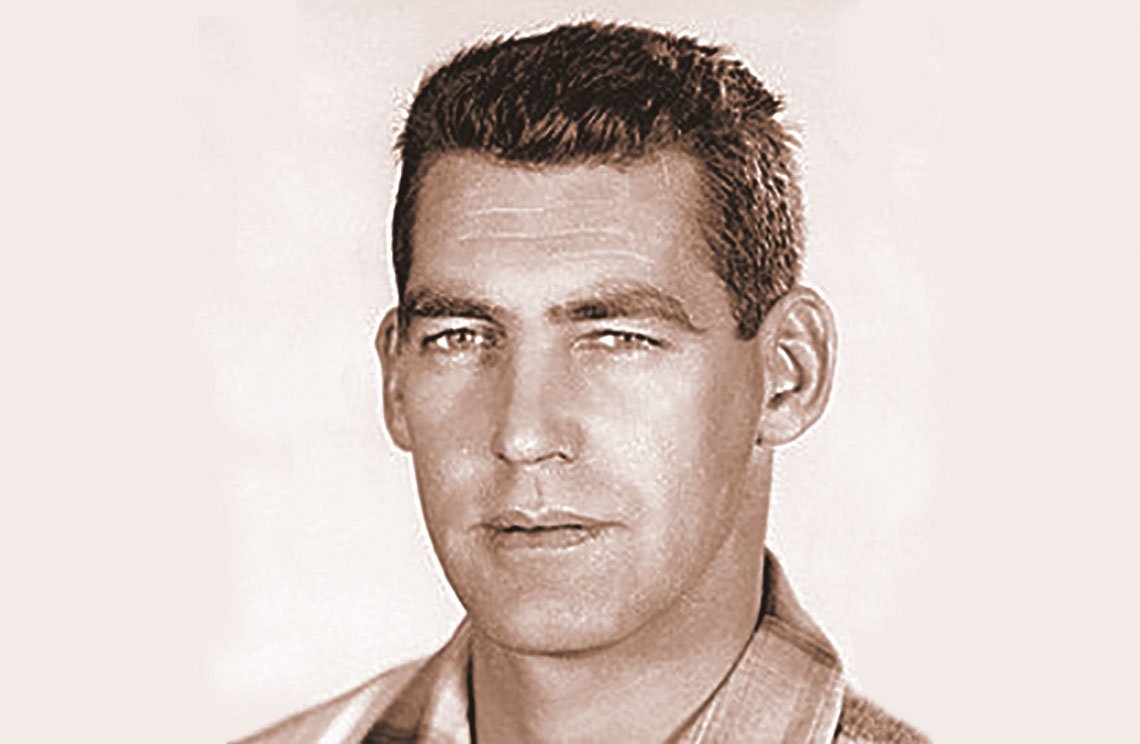 An Australian and Canadian Sporting Hero and Legend

Who is Peter Mullins, you may well ask and I would be very surprised if anyone could answer correctly.

Yes, Peter Mullins was an outstanding athlete, who was simply very very good at anything he turned his hand to.

Standing 6’4” tall and weighing 200 plus pounds, he was indeed a very imposing figure .

He was just one of those guys growing up that you had to hate, because their was nothing that he wasn’t good at.

Born in Bondi in 1926 and growing up in the Eastern Suburbs of Sydney during  WW2, he shone at every sport that he played.

But not just sport, he was academically gifted earning a Masters and Doctorate in Physical Education from the University of British Columbia and  went on to become an outstanding Coach after his playing career had finished.

He was even a talented Theatrical performer with numerous roles in Gilbert & Sullivan musicals such as The Pirates of Penzance with his very extensive singing and dancing talents.

He grew up in a somewhat  dysfunctional family, with a very dominating mother and a father who spent more time at the local pub than at home, supposedly with an income that no one seemed to know where it came from  There were four children in the family, 2 boys and 2 girls and interestingly not one of the children ever married and that is surely unusual.

His relationship with his father was such, that he didn’t even tell him that he had been selected in the 1948 Olympic team

His father found out from some mates at the pub, lost a bet about it and when he questioned Peter as to why he hadn’t told him, Peter replied, well you have never ever been to watch me compete, so I assumed that you were not interested and then had to explain to him what the Decathlon was .

Not only was he an outstanding athlete and basketball player, but he also played first grade Hockey, scoring 10 goals in one game,  first grade Rugby League and Union,  first grade Australian Rules Football, a member of the Australian Junior Davis Cup squad defeating Bob Howe who went on to win a Canadian Singles and Wimbledon Mixed Doubles Crown.

But it doesn’t stop there, he was also an accomplished table tennis player and an excellent swimmer, winning many titles and holding many records at Sydney Teachers College and also a very good water polo competitor.

His brother Tom was the Australian Hammer Throw Champion

He was a serious athlete from the age of 15 in the Pole Vault, but soon graduated to compete in the Decathlon, where he not only held the Australian record of 6,739 points, almost 1,000 ahead of his nearest rival.

Most sports pundits would agree that the best Decathlete is really the greatest athlete on the planet, as they not only need to be highly proficient in 10 different disciplines, but often they could also medal individually in some of those 10 events.

He took up Australian Rules Football as one of his friends played, but it would be Basketball where he really made his name, more about that shortly.

As the Australian Decathlon Champion, he qualified for the 1948 London Olympics where he finished a very creditable 6th behind the 17 year old American Champion Bob Mathias.

When Mathias was later asked who he was most worried about, he replied  –  “  Peter Mullins of Australia “.

Following the Olympics and winning another National Decathlon title in 1949, his star was rising in International circles.

His interest in Basketball led to him representing NSW and being a part of  3  National Championship winning teams.

A player 6’4” tall was considered quite big in those days and widely sought.

He is very fondly remembered at Washington State, where he played under the legendary coach Jack Friel – “ The Prune “  who was head coach for a record 30 years.

There have been many other notables who have attended Washington State including Australian and NBA star Aaron Baynes and Golden State Warriors legend Klay Thompson.

In the early 2000’s the Cougars hired long time Coach Dick Bennet as head Coach, who brought his son Tony with him as an assistant.Tony had played under his father coach Dick in Wisconsin and went onto play 3 years in the NBA with the Charlotte Hornets as well as a short stint in the Australian NBL with the Sydney Kings.

He went onto succeed his father at the Cougars and had a very successful 3 seasons there, before he famously led the University of Virginia to the 2019 NCAA Championship

I was fortunate enough to meet another legendary coach, Marv Harshman during one of my visits to the area, he coached the Cougars for 13 years replacing Jack Friel and compiled a very impressive record during his very long coaching career, before transferring across to the Seattle based University of Washington Huskies.

But back to Peter Mullins, following his graduation from Washington State, in 1955 Peter moved to Vancouver in British Columbia in Canada  where he took up a position as a member of staff in the Physical Education department at the University of British Columbia, as well as coaching their Track team and the Freshman Basketball team, the Braves to the BC Junior Mens Championship in his first year.

During this time he also obtained his Masters Degree and a Doctorate in Physical Education.

In the meantime he spent a season touring the world with the Washington Generals, the team of unfortunates who played every night against the Harlem Globetrotters, but were never allowed to win.

This included the Trotters first visit to Australia where his broad Australian accent was extremely confusing for the Australia Media and fans.

I vividly remember seeing the Globetrotters play at Memorial Drive in Adelaide when they were at their Pinnacle in about 1960.

In one play, one of the Trotters standing in the centre circle had the basketball pitched to him baseball style and he hit it with 2 clenched hands straight down the court and into the basket. I was absolutely amazed and it took me some time to comprehend that it was just a lucky shot and that it didn’t go in every time

Whilst at UBC, he also played professionally in Canada in the Senior A league and was selected to represent Canada at the 1959 World Championships in Chile.

Mullins was highly regarded by his Freshman players for his talent with teaching of skills and player development.

In 1962, he took over as Head coach for the Varsity team, a position he would hold for the next 20 years, whilst also retaining his roles as head coach of UBC’s Track & Field and Cross Country teams producing some notable Olympians.

They also won the Canadian University title in 1970 and 1972, but his most memorable team was the 1969/70 Thunderbirds group that has been inducted into the UBC Sport Hall of Fame which finished 28 – 4 overall and went 24 – 0 against their Canadian competition winning the Championship game by 21 points.

This group including the 70 / 71 season won an amazing 36 games straight against Canadian opponents.

The 1972 team was also inducted into the Hall of Fame.

Mullins was renowned for being able to create a special team spirit and compatibility amongst his players.

In 1969 he was named to coach the Canadian National Team and piloted a 4 year program in preparation for the 1971 Pan Am Games and the 1972 Olympics.

In 1970 he was also appointed to coach the Canadian team at the World Student Games.

In recognition of his efforts in Canada, he has been honoured through the Dr Peter Mullins Trophy awarded to the Canadian Inter – University Athletics Union Rookie of the Year and was in 2004 inducted into the BC Hall of Fame.

Following his retirement he decided to return to Australia to spend time with his family.

He sustained a fall fracturing a hip and passed away soon after in 2012 at the age of 85.

Vale Peter Mullins and congratulations on a very successful career and a life well lived.

He was a true Australian and Canadian sporting hero and legend.