Who Did Invent The High Five 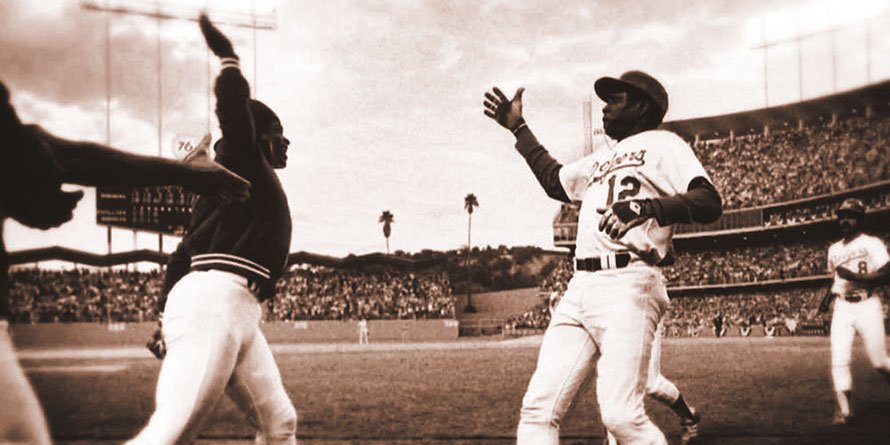 This American gesture has been somewhat hi-jacked around the world and has now become a part of everyday life, with even conservative politicians succumbing to the practice.

It has however been upstaged recently by the clenched fist touch, especially during these Covid 19 times.

It remains as the ultimate expression of joy and celebration between team mates to signify their delight at the completion of a good play or score  and although it came from baseball, it quickly established itself with all sports.

The phrase then morphed into the variation “ give me five “ and  “ give me some skin “ ,  with the “ Five “ referring to the number of fingers on the hand.

It has also been suggested, that it originated as a variation of the “ low five “ which had been a part of the African – American culture since the 1920’s.

I find it particularly amusing when flabby, overweight,  parochial team supporters start high fiving each other in the stands, almost suggesting that they had a part in the achievement that just occurred on court   –  oh really, I don’t think so.

So where did it start ?

On October 2nd 1977, Dusty Baker from the Los Angeles Dodgers came in to bat in the 6th innings of a game against the Houston Astros and struck a home run, making him the 4th player that season from the Dodgers to register 30 home runs for the team, a MLB record.

On his victory run, as he approached home base, his team mate Glenn Burke was standing there and raised his right hand above his head.

It was a very exciting moment and Baker says I was not sure exactly what to do “ his hand was up in the air and he was arching way back “  Baker said –  “ so I reached up and hit his hand, it seemed like the thing to do “

And the High Five was born.

There have been some other claims made, but this one was on film.

Two players from the Louisville Cardinals basketball team also have made some claims, but theirs occurred in the 1978-79 season, so that immediately eliminates it.

Two comedy writers made claims in the early 80’s, but later admitted that their claim was a hoax and was made for publicity purposes.

Magic Johnson also threw  his hat into the ring, suggesting he did it regularly whilst at college at Michigan State in the late 70’s, whilst others have made claims that it came out of Women’s Volleyball in the 1960’s.

But NO, the claim goes to Glenn Burke and Dusty Baker, who have been very modest about their achievement, almost in some ways a little embarrassed.

As it turns out Burke was the very first player in the MLB to “ come out “ and although he loved the club and was very popular with his team mates, was soon after traded by the Dodgers to the Oakland Athletics, but felt the it was never the same and that he wasn’t able to fit in the his new club and decided to retire after 3 seasons.

He sadly died in 1995 aged 42 from Aids related illnesses.

Dusty Baker has enjoyed a lifelong career in the MLB, first playing for 19 years as a hard hitting outfielder for the Atlanta Braves and the LA Dodgers, winning a Championship with the Dodgers in 1981,  before retiring to become a Manager with the San Francisco Giants, Chicago Cubs, Cincinnati Reds and Washington Nationals.

In January 2020, he was hired by the Houston Astros.

Following that very first “ High Five “, the practice spread very rapidly around the world, into all sports Male & Female and into everyday life.

So when you see LeBron James, Roger Federer, Lionel Messi or Tom Brady doing it, remember they are just paying homage to Glenn Burke and Dusty Baker.

I seriously doubt if there is anyone reading this, who has not participated in the practice, if you suggest that you haven’t, then I have just one piece of advice, you need to go get a life.

So there you have it, when next you have the urge to do a “ High Five “ with a colleague or friend, go do it, only this time you will know where the practice originated from.

But please do it correctly, you slaps hands, do not grab the other persons hand and please totally refrain from silly variations such as – “ Up High, down Low “  – “ sorry too Slow “

Who Did Invent The High Five