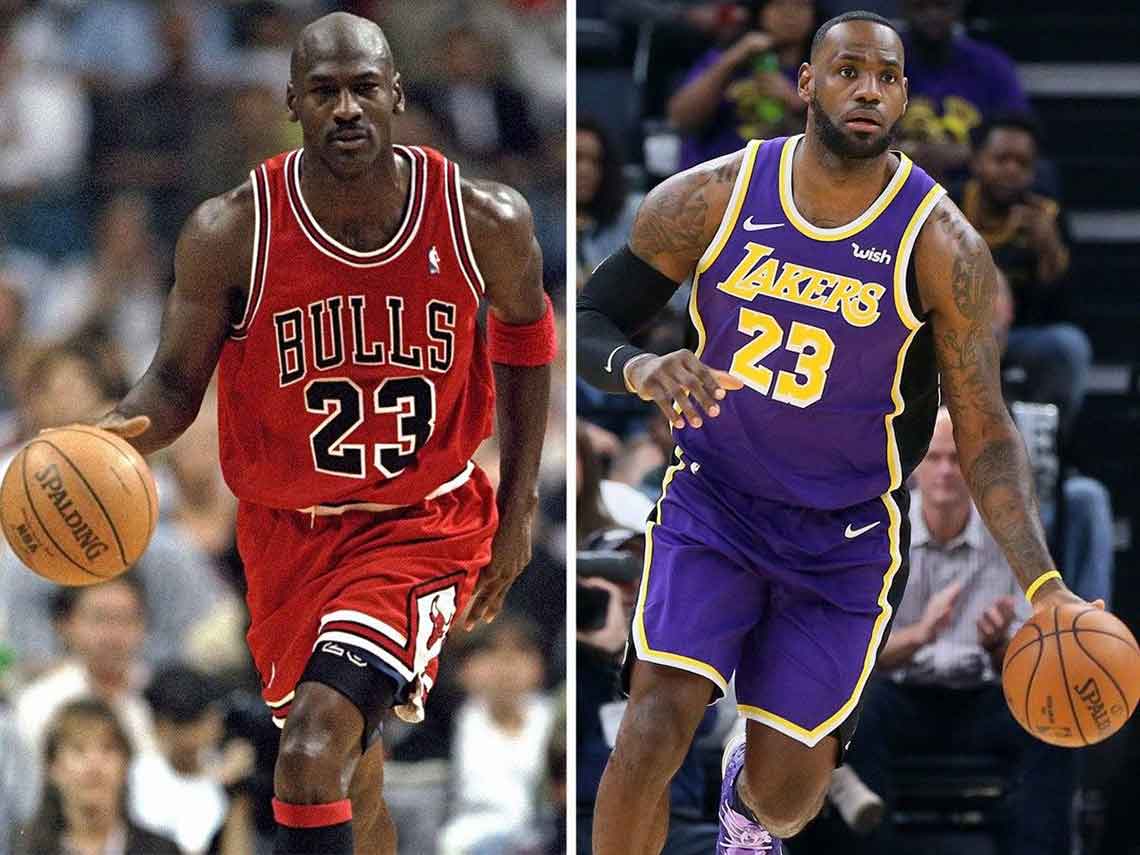 There have been so many great players in the NBA, it makes choosing who is the best player ever a very very difficult choice. It is also extremely difficult to choose between players from different era’s as the game has changed so very much.

For example the 3 point line was not introduced until 1979, individual players scoring levels increased as a result.

In order to bring some fairness to this debate I have look at the best players up until the 70’s and then also from the 80’s onwards.

From the early days, the standout players from my perspective were, not in any order  –

My sincere apologies to anyone that I have inadvertently left out, but you might notice that there are two of the most notables omitted, these are of course according to most pundits the best two players of all time   –

So let’s take a look at their career highlights to help us make a decision on who is the GOAT.

Was drafted straight from High School at Pick No 1 in the 2003 NBA draft by Cleveland Cavaliers.

Was rated as the best High School Player in the USA and also the best College player by Roy Williams the then assistant to Dean Smith at UNC. It is said that the only Coach who could keep MJ under 20 pts per game was Dean Smith his College Coach.

The question is, could the Bulls have won a 7th title in 1999, had the organisation not gotten rid of the Coach, go figure, which led to MJ, Scottie Pippen and Steve Kerr all leaving as well ?

Although both are obviously the two greatest players, I think that a study of the above information favours Michael Jordan.

Firstly he was 3” shorter than LBJ, but as 2 Slam Dunk Contest wins at the All Star game attest, he was a better Athlete.

One wonders how much LBJ was helped by his height advantage over MJ.

MJ was a better Shooter, a better Scorer and was better, virtually unstoppable,  when driving to the basket.

His poise and balance in mid air is really quite incredible.

MJ has also never lost a Championship series, he is 6 from 6.

LBJ has participated in 9 Finals series, but winning only 3, 2 with Miami and one with Cleveland.

With NBA Championships MJ led the Bulls to do a Threepeat twice, the second time after coming back from 2 years playing Baseball. LBJ has never been able to repeat.

LBJ has played 17 seasons in the NBA compared to Jordan 14, don’t forget that MJ missed 2 seasons flirting with Baseball and another 3 playing College Ball which LBJ didn’t. MJ also had 3 years off between Chicago and Washington.

MJ’s stats would also be better without his 2 years at Washington where his points per game dropped to around 21.

His Career average ppg at Chicago was 31.45.

So some might disagree and think that LeBron is the GOAT, or even perhaps Kobe Bryant or Magic, but look closely at the above and you should agree that it is clearly Michael.

If you have watched the 10 episodes of “ The Last Dance “, then how could you not be left in absolute awe at some of his drives to the Basket, he absolutely takes your breath away.

As for the GOAT –  no question – MICHAEL JORDAN

I was extremely fortunate to have seen MJ play in 1998 in Chicago at the United Center, when they played Charles Barkley and the Houston Rockets. They guarded each other for most of the game.

MJ had 24 pts at quarter time and finished with 45. Sir Charles had 39. it doesn’t get any better than that.

Please feel free to add your thoughts and comments